2007 was pretty excellent to me. I already released a mix earlier this month so I was trying to save this for next year, but fuck it. This is a good one to dance to with your friends before you leave the house on the 31st. Enjoy: 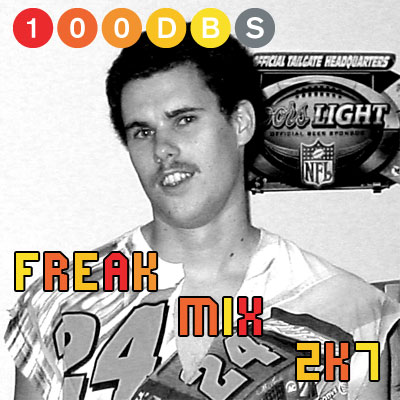 See you next year…

Last minute addition to the schedule for December… tonight I’ll be spinning at The Slackers Holiday Show, taking place at the Bowery Ballroom from 7pm on. For all you reggae heads still in the city, come out to hear classic roots, ska, and rocksteady all night! The list of past guests is bonkers: Alex Desert (Hepcat), Sturgeon (Choking Victim), Doreen Schaeffer (The Skatalites), Glen Adams (The Upsetters), and so on.

Jews feel left out during Christmas. It’s a fact, don’t be embarrassed. Celebrate your lack of holiday ham with us instead: 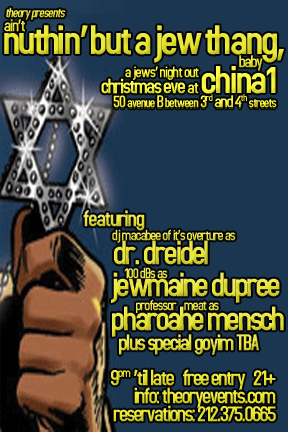 For those who missed it, I released another rugged mix last week. All I’m going to say is that the first track pits M.O.P. against Four Tet: 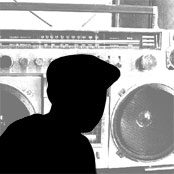 I’m now spinning every third Thursday at Supreme Trading, just off the Bedford stop in Williamsburg. $5 will get you a PBR and a shot of bourbon. Special guests TBA:

Fact: Alex Decibels has a posse. Saturday night was wild. Thanks to all the College Park kids who came out to celebrate. I ended up driving back to Baltimore at 5 in the morning.

“Since it seems to be the theme (and meme) of the day, we’d be remiss not to point out Harder, Better, Faster, Self-Employed but our favorite’s Touch It While Pissed Up for its schizo mix of old- and new-school vocal cadences. The title doesn’t hurt either.” – Stereogum

Dust off those Cosby sweaters for Thanksgiving weekend. If you’re stuck in the city, at least you can party in style: 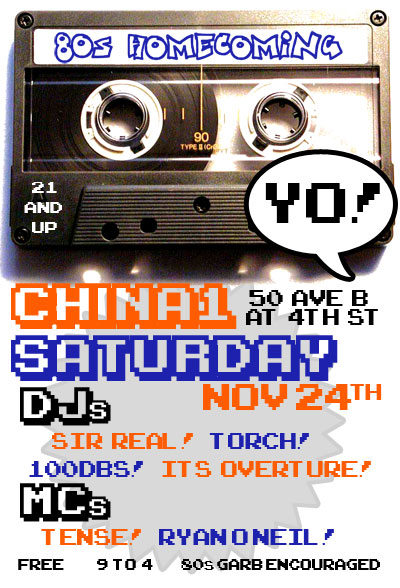 Decibelle is having a birthday party this Saturday in College Park. If you’re in the area, swing by WMUC and shake your ass. I’ll be spinning tunes with the Fives Kids.

The Aphex Twin Mashups got the internet goin’ nuts:

“New York mixmaster cross-breeds Busta Rhymes, T.I., Nas and Snoop with the always-eerie Richard D. James. Fortunately, the results are not nearly as scary as the video for Come to Daddy.” – Rolling Stone

Tonight is Soundclash with Iron Lyon and friends. See you in Williamsburg: 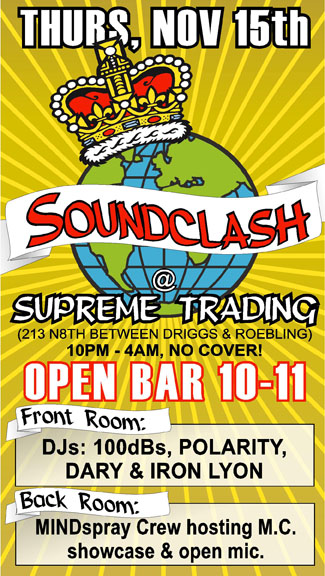 I’m back from Berlin (amazing city), and the Aphex Twin mashups that I promised are now posted for free download. Ever wanted to hear Snoop Dogg over RDJ’s production? Now you can:

I’m spinning at Continental tonight (St. Marks and 3rd Ave, NY
), then Ryan and I have a show at Midway opening for High Priest of Anti Pop Consortium. Props to Domer.

One last thing: who the hell does Steve Jobs think he is? Since when does Apple get the right to redefine alphabetical order? One of the recent iPod updates causes artist names that begin with numbers to appear at the end of lists instead of the beginning. Of course, this confused the shit out of people who weren’t expecting this random change, and affects me directly. Jobs, I love your hardware (no homo), but give me a fucking break.

I’m doing an early set opening for Eleven tonight. If you don’t know DJ Eleven yet, punch yourself in the face, then stop by Turntable Lab and pick up one of his mixtapes – he’s nice with it. And if you don’t know me yet, maybe you will after tonight.

More reviews of the album are still coming in. Some props for Ryan:

“Turns out, hip hop’s not dead. O’Neil solidifies this conclusion on the album’s final track, the red-hot ‘100 MCs.’ The Bandit discusses the magnetic draw that inspired him to rap, eventually leading to this – a smart, varied, and exciting album that should prevent anyone else from pursuing the genre’s big question.” – Glorious Noise

Another feature and interview by a UK site:

“The beats sound modern, but with a major nod to that early/mid 90’s feel. I can’t front, it’s just tight. This isn’t an LP of a few standout tracks with a load of filler, it’s an album of complete consistency, back to front.” – Urban Species

Guess who else decided our shit was worth featuring…

“They don’t pretend to be Native Tongues or try to imitate the output of D.I.T.C., but they come off like the logical antecedent of those artists, as if the lineage from one to the other has remained unbroken by the last 10 years of capitalist confusion, or at least as if the reigns of those artists had continued uninterrupted.” – Okayplayer

I’m off to Germany next week. Holla at a playa when you see him in the Berlin streets.

“dBs plays the role of magician as well as maestro; he manages to cram a ridiculous number of sounds, samples, cuts, and scratches onto each track without the sum sounding like a crowded mess.” – Beatbots

Can you taste that? That sweet syrup is called victory. Last week, Beatbots reviewed a Living Legends album, the new Aesop Rock, and The Adventures of The One Hand Bandit and The Slum Computer Wizard. Guess who came out on top?

I’m not one to dwell on these things, good or bad. There’s work to be done. So with that in mind, let me officially announce my reggae night, happening twice a month at China1 on Thursdays (starting this week): 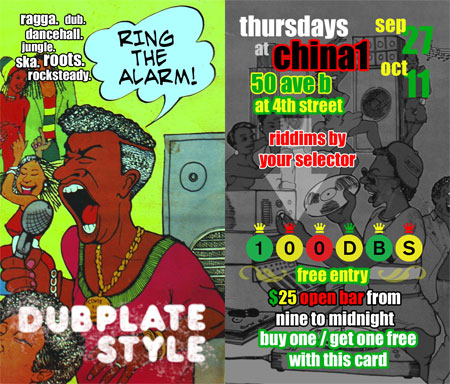 I will be playing anything and everything related to JA. Feel free to shout REWIND at me. After all, it’s called Dubplate Style for a reason. What else? I’m opening for DJ Eleven (The Rub) at Lotus on Oct 5th, and doing a show in Berlin on Oct 20th thanks to the Antagonist crew. 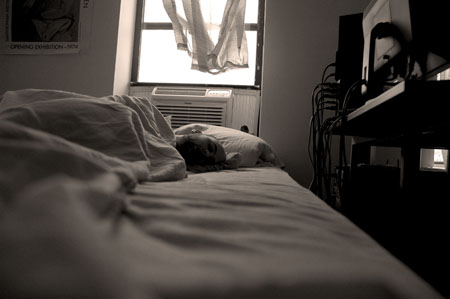 Yes, I sleep. That doesn’t mean you should. Our album has already been pirated on foreign blogs. In the interest of financial stability, I won’t tell you where, but I will say that I am impressed that it only took them a few days to bootleg our shit. I’m doing Thursday with Ryan at Niagara as usual, and on Wednesday I’ll be spinning at Pianos thanks to Ole. Come upstairs and say whatup: 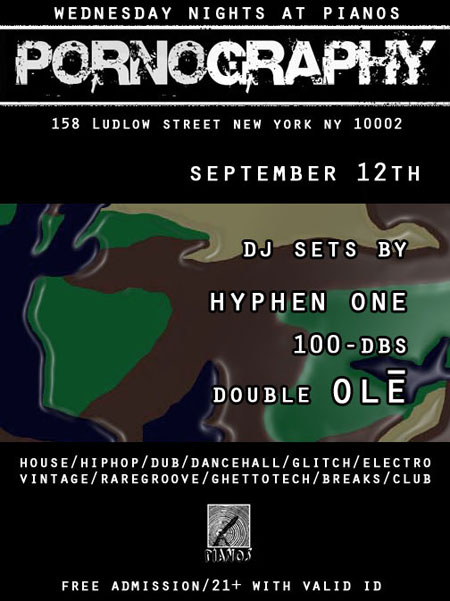 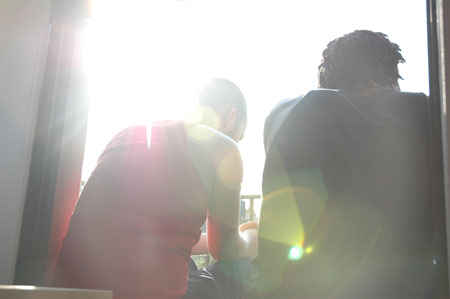 Ryan and I nearly killed each other, but the album got finished last week, and the release party was a huge success. Thanks to everyone who came out and showed us some love by grabbing a copy. If you haven’t gotten one yet, you’re playing yourself. Let me break it down like this: Ryan’s crazy Jamaican uncle talking his shit, a guest shot from Prince Po of Organized Konfusion, a posse cut with no hooks, songs that get you hornier than the Isley Brothers, and our mothers screaming on us. Yeah, our moms are on the album… so? The CD is $10 shipped to anywhere in the US (get at me personally if you’re out of the country) and the digital download is $8 for everyone: 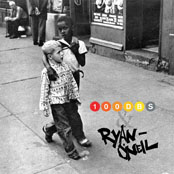